For a small business, Yelp reviews can have a huge impact on your local reputation. In a world where everything is sociable and shareable, many people look to Yelp to find out information about the quality of small businesses in their neighborhood.

For those that have a bevy of positive reviews, this can build confidence among consumers and lead to an abundance of new sales. However, for a business that has bad reviews on Yelp, the results can be disastrous for their reputation.

When small business owners see that a person has left a negative review on Yelp, a variety of different emotions are likely going to run through their minds. Thoughts that range from “That person doesn’t know what they’re talking about” to “It must be one of my competitors trying to slander my company” — they are all likely.

As your blood starts to boil and you only get more angry, it’s also likely that you consider what sort of legal action you can take against the person who has left a negative review.

One of the first reactions is to take the reviewer to court and sue them for leaving a bad Yelp review.

Cases like this are popping up all over America, with mixed results for both business owners and reviewers. Here is a look into whether a business can sue someone for leaving a bad review on Yelp, and what is needed on behalf of each party to stay legally protected.

Reviewer Is Protected Under the First Amendment

It’s important to understand that, under the First Amendment, a customer does have the right to leave a review based on his or her experience at a particular business. The First Amendment protects citizens and allows them to speak freely, which can include both positive and negative experiences.

While the First Amendment does ensure free speech, it doesn’t prevent false or untruthful comments that hurt a company’s reputation. This means that the comments made by a reviewer on Yelp must be proven as truthful or honest, based off their experience with a particular business.

For example, in the Arizona case above, a woman went online to share her experience with a vehicle repair company. Kendra McConnell claimed that after leaving her Jeep with Premier Coach Works in El Mirage, they failed to do an adequate job of repairing her vehicle. In her review, she stated that the company failed to return phone calls, overcharged for services and did not properly repair the vehicle as promised.

This sort of situation can certainly be a challenge for both parties. For the consumers, they feel as if they’ve been cheated and have the right to leave a review based on their experience. But for Premier Coach Works, the company feels victimized by the impact that a negative Yelp review can have on its business.

Business Must Provide the Burden of Proof

In deciding whether a company can sue reviewers for their negative comments online, it comes down to the ability of that company to prove the statements made were untrue. For example, in the Premier Coach Works case, it was up to the company to prove that McConnell was not being factual in the comments she made. 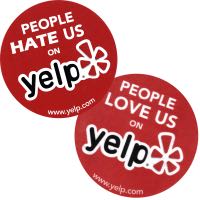 As a consumer, knowing that you can be taken advantage of by a company can be a scary thought. Luckily, we now live in a time in which nearly everything can be recorded and used as justification for improper services. For example, a customer can use emails, text messages and legal tender to prove the commitments were not upheld by the company they used.

If the evidence proves that the comments on Yelp were factual and honest, there are no grounds for the reviewer to have to remove the post. In addition, the business cannot sue the reviewer for those comments.

While businesses may hear this and think they are now at the mercy of their customers, this isn’t necessarily the case. Just as consumers can use evidence to argue their reasoning for a negative review, the company can use the same information to defend the reputation of their business. In the event that the case moves to a courtroom, the same information can be used to persuade a judge to have the review on Yelp removed if the post is not truthful.

Both Parties Can Come to an Agreement

Yelp was created with the intention of being a platform on which consumers could state their insight and experiences with local businesses. The truth is that this helps to protect consumers, and it also holds businesses to a higher standard to ensure that they’re providing the best service possible to their customers.

Because of the damage that negative Yelp reviews can cause, however, there is now concern for customers making untruthful comments about their experiences at a given business.

In the case of McConnell and Premier Coach Works, the two sides came to an agreement outside of court. In many instances, this could be what ideally occurs for businesses and Yelp reviewers.

If you want to prevent the headache that comes from a negative Yelp review, there is a simple solution: Make sure you give great service to every customer who walks through the door. However, if you’ve done all you can and you still feel you’re receiving unjustified negative reviews on Yelp, it’s important to know that your business is protected.

Evidence is everything when it comes to these sorts of cases on Yelp. So whether you are a business or a customer, make sure you are prepared to defend yourself and the actions you take online.

— Taylor Reaume is an e-Business coach and founder of Search Engine Pros. He can be contacted at taylor@thesearchenginepros.com, or 1.800.605.4988. Click here to read previous columns. The opinions expressed are his own.