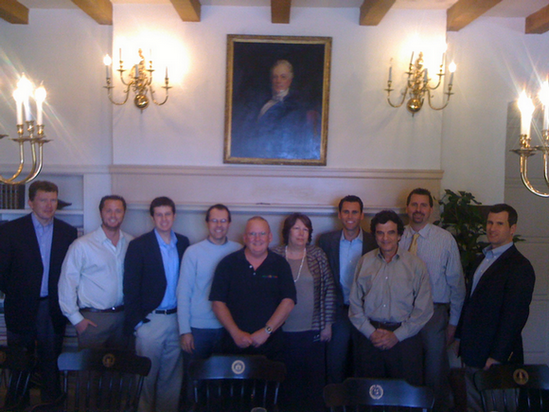 I felt very fortunate to be able to be involved!

I got an email last month from Catalyst who let me know the details about an upcoming lunch opportunity with retired Google Vice President of Engineering, Wayne Rosing. I simply could not pass this up, being so heavily into Search Engine Optimization.

We met about Noon, April 15 in downtown Santa Barbara at the University Club. I first became aware of Mr. Rosing after I attending an interview conducted by a fellow SEO colleague of mine Jaques Habra at SBCC. I was fascinated by the gems of wisdom Wayne shared about managing employees, and the Google Way.

I left very fortunate to be involved in the lunch meeting with Wayne, and I actually got to sit right next to Wayne at the table. I learned some interesting new facts about Waynes history with the “G”, and also was fortunate to ask a couple questions as well. A few key takeaways I had from Mr. Rosing with regards to the Google hiring process:

1. The candidate must be highly technical

2. The candidate must be high sociable

3. The candidate must be able to work long hours and be passionate about success.

Wayne says Google was successful in hiring many people right of college. The ability to learn and adapt, and the work ethic he says was generally stronger with that demographic.

There were many other tid bits of wisdom Wayne shared with the group, such as making sure your employees are motivated, and incentivizing them in some way. He spoke about hiring the right people and how to manage them successfully, the Google way, and how to sharpen the hiring focus.

The more I listend to Wayne speak, the more I realized how much Google is really one of the foremost “epicenters of innovation” in so many ways. All in all it was quite a fascinating experience to be at the same table with Wayne – a very friendly and personable guy.

Wayne Rosings’ training has been in mathematics, physics and astronomy.  Gaining experience as an engineering manager at DEC and Data General in the 1970s, he became a director of engineering at Apple Computer in the early 1980s. There he led the Apple Lisa project, the forerunner to the Macintosh. He then went on to work at Sun Microsystems and headed the spin-off First Person. At Sun Labs, his team developed Java. Rosing served as Vice President of Engineering at Google from January 2001 to May 2005.
He is a computer engineer by vocation, and has been programming, doing computer, electronics and optical design and telescope engineering since high-school.
Most recently, Wayne founded Las Cumbres Observatory Global Telescope Network, Inc. (LCOGT) now located in Goleta, CA.

At LCOGT, he and his staff of engineers and scientists are currently developing scores of 1 & 0.4 meter aperture telescopes to be placed in various locations around the world.  These telescopes will be used  for scientific research as well as be available for educational use by “learners of all ages.”
You can check their work out at: http://lcogt.net/
Mr. Rosing currently resides in Santa Barbara, CA.